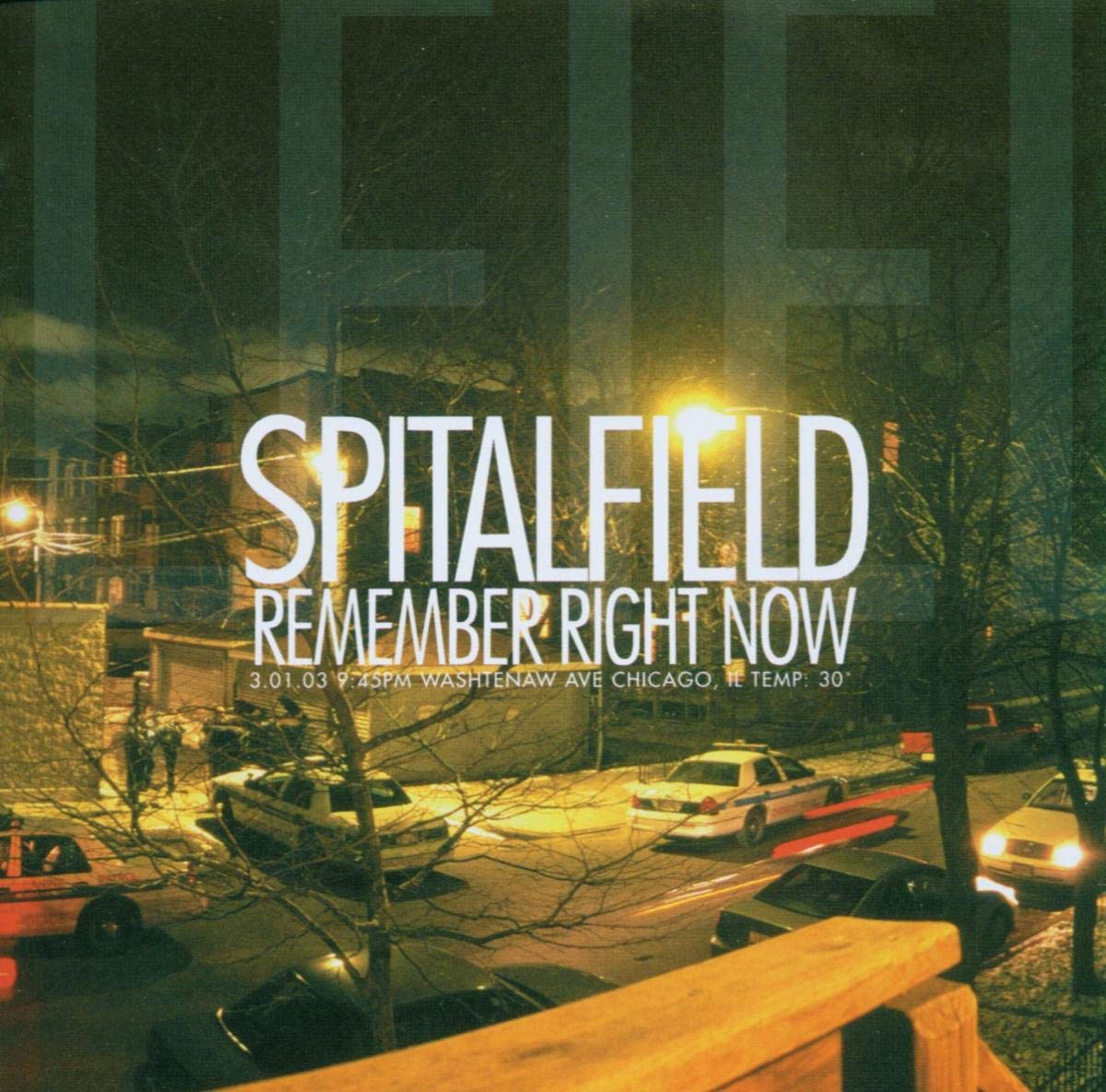 "listening to this makes me want to stand up and sing..." SPITALFIELD, taking their name from Jack The Rippers hometown, formed in 1998 and have two non-Soundscan releases under their belts along with plenty of live shows. The Chicago band is often described as "driving indie-pop rock" to "emo influenced punk with ultra-subtle hardcore undertones". SPITALFIELD keeps the rock flame alive by delivering a hugely infectious and emotionally effective album. From large venues to basements, they have performed with bands that range from JURASSIC 5 to THURSDAY including- HEY MERCEDES, THE MOVIELIFE, BRAND NEW and ALLISTER. They have amassed a large and loyal following in Chicago who are attracted to their heartfelt, sincere and contagious music. SPITALFIELD demonstrate that the punk spirit can have a future in pop music.

THIS BAND IS GOING SOMEWHERE. GET TO KNOW THEM. -- PUNK PLANET

From the ashes of numerous Windy City hardcore bands, the four members of Spitalfield converged to create a sound distinctly their own. Interested in playing something more heartfelt and sincere, founding members Mark Rose (vocals/guitar) and J.D. Romero (drums) began writing songs in 1998 that combined their alt/indie rock influences with pop emphasis and the energy and immediacy of hardcore. While we were playing in hardcore bands full-time, our musical tastes were expanding, and we began to draw influences from bands like Texas Is The Reason and Braid, so we started the band as a side project. Its ironic that Spitalfield ended up being our full time band! Like most young bands, Spitalfield went through several line-up changes in the early years. Dan Lowder joined the band on guitar in 2001 and the band recently welcomed T.J. Minich on bass.

Since the band's inception, they have amassed a large and devoted hometown crowd, largely thanks to their energetic, visceral live shows. From large venues to basements, they have performed with a wide range bands, from Jurassic 5 to Thursday to Hey Mercedes, Rise Against, Brand New and The Movielife to name a few. The band has toured the Midwest for years and expanded out across the U.S. in the past year, sacrificing everything for the opportunity to play in front of new fans.

Spitalfield began releasing recordings in 2000, and in 2002, The Cloak and Dagger Club EP was released on Sinister Label. It was recorded on a shoestring budget, but effectively showcases the bands songwriting prowess and versatility. The band began receiving great reviews from the likes of Maximumrocknroll and Punk Planet, and interest from larger labels followed.

In January 2003, Spitalfield signed to Victory Records, and almost immediately headed into the studio to record Remember Right Now. Working with producer Sean OKeefe (Motion City Soundtrack, Knockout, Fallout Boy) at the legendary Smart Studios in Madison, Wisconsin, the band was able to capture their sound accurately for the first time. What separates this record from anything we have done in the past is the amount of time we were given to make it and the opportunity to work with a great producer in an amazing studio. It was very exciting, commented Mark. We have all matured as songwriters and musicians and this record really represents where we are now. Lyrically I tried to push myself I put a lot of thought into the lyrics as they relate to each other as an album instead of just as individual songs.

The early response has been amazing, as word spreads, websites like Emotional Punk have become supporters of Spitalfield, saying, "'Remember Right Now' combines post-hardcore, indie, and melodic rock and avoids the overdone conventions of the typical, expanding upon their own style with an incredible pop sensibility." Following the June 17, 2003 release of Remember Right Now, Spitalfield will hit the road and tour non-stop.

How To Fast Travel In Forza Horizon 5

How To Unlock Barn Find Locations In Forza Horizon 5?

Forza Horizon 5 Servers Down? How To Check FH5 Server Status

Karan Pahuja Nov 6, 2021
Looking to get some Bells from your visitors that visit your island in ACNH? You need to get yourself the Donation box.
Mobile

Mihir Hate Nov 6, 2021
This guide will show you which is the best Deck Build for the Golden Knight in Clash Royale.
Age Of Empires 4

Karan Pahuja Nov 6, 2021
Looking to decorate your room better? You need to get the pro decorating license in ACNH.
Call of Duty

COD Vanguard Operators Unlock Guide: How To Unlock Characters In Call Of Duty?

Mihir Hate Nov 6, 2021
This guide will show you how to unlock each and every operator in COD Vanguard.
Animal Crossing New Horizons

How To Get Froggy Chair In Animal Crossing New Horizons (ACNH) Update 2.0

Karan Pahuja Nov 6, 2021
Froggy Chair is here in Animal Crossing New Horizons Update 2.0 and in this guide learn how you can get it.
ArtDirect Custom Black Ornate Wood Picture Frame with Double Mat

Lost Ark How To Get Silver?

Mihir Hate Nov 6, 2021
This guide will show you how to get Silver in Lost Ark.
Call of Duty

How To Fix Blueprint Bug In Call Of Duty Vanguard?

How To Get Carrots In ACNH 2.0 – Grow And Use Carrot Vegetable

Karan Pahuja Nov 6, 2021
Looking to grow carrots in Animal Crossing New Horizons? In this guide learn how to get a carrot in ACNH and what are its uses.

How To Find The Murmiliacum Wealth (Wretched Scythe) In AC Valhalla: The Siege Of Paris

Paladin Armor Locations In AC Valhalla: The Siege Of Paris

AC Valhalla Siege Of Paris Bernard Choice: Should You Hand Over The Boy Or Not?

All Frankish Noble Locations In AC Valhalla: The Siege Of Paris

AC Valhalla Siege Of Paris: How To Beat Heavy Cavalry?

Diablo 2 Resurrected Barbarian Leveling: How To Level Up Fast In D2R

Are Among Us Servers Down? How To Check Server Status

HappyMod Among Us – What Is It & Is It Safe?

Among Us – How To Use Controller